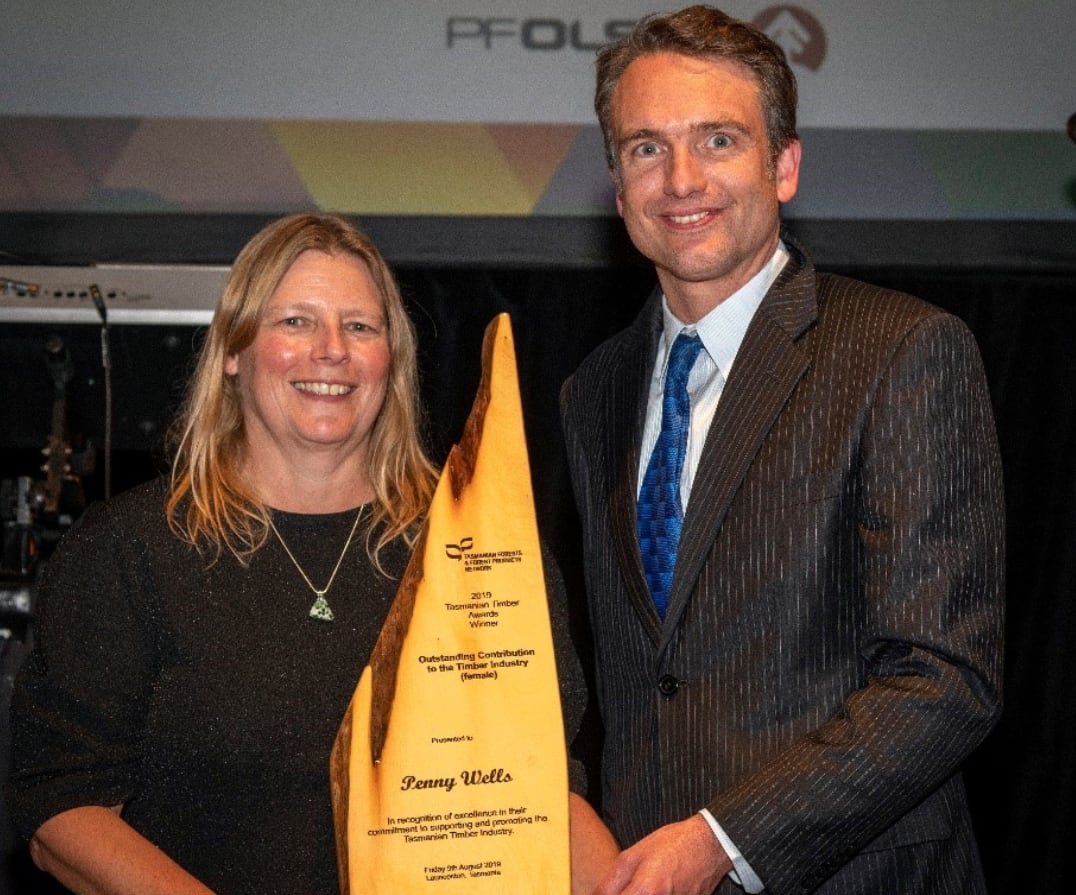 This Award recognises an individual who demonstrates excellence in their commitment to supporting and promoting the Tasmanian Timber Industry.

Penny Wells has made a significant and sustained contribution to the Tasmanian Timber Industry over thirty years of working within and around the industry.

Penny’s current role is Chief Executive Officer (CEO) of Private Forests Tasmania, where she works with her team to facilitate and expand the development of the private forests sector in Tasmania. Penny provides policy advice to the Tasmanian Government and helps support private forest growers with innovative planning tools.

Penny has worked for a variety of government departments during her career, including Primary Industries and Development portfolios, and Forestry Tasmania from 1997 to 2003. Upon leaving Forestry Tasmania, Penny joined Private Forests Tasmania and worked her way up to the CEO position she now holds.
Alongside her career, Penny and her husband ran a small specialty timbers sawmill from late 1990’s to 2007.

Penny’s key contributions to supporting and promoting the timber industry have been to the development and evolution of Tasmania’s forest management systems, that are as practical and pragmatic as possible within the constraints of politics and community expectations.

Penny has been committed to developing practical outcomes by consistently working in consultation with the industry in a manner designed to reduce costs of compliance as far as possible, while making the forest management systems in Tasmania as efficient and effective as possible.

When Penny found out she was nominated for a TFFPN Award, she was extremely humbled.

Penny’s contributions to the Industry have been far and wide, but she has a few contributions she considers highlights of her career.

“I think being involved in the development of the original 1997 Tasmanian Regional Forest Agreement was a significant contribution,” she said.

“I led the team which recently worked to extend the Regional Forest Agreement to become a 20- year rolling agreement in 2017. This work is the most significant thing I feel as though I have achieved.

“The Regional Forest Agreement means that the State’s comprehensive Forest Management System is accredited by the Commonwealth of Australia. For Tasmania, this means all our forest operations only require State approvals.”

Penny and many of her colleagues attended the Tasmanian Timber Awards on 9 August in Launceston.

Penny said the event was wall to wall fun and a great opportunity to network within the Tasmanian Forest Industry.

“It ran smoothly and to time and was a great night. Next time I would love to hear more about the work that the winners are doing in the Industry.”

Penny said winning the Outstanding Contribution to the Timber Industry Award was an incredibly rewarding experience.

“I was very excited and very humbled at the same time!

“I don’t recall ever having won an award during my professional career, so I am extremely chuffed!”

The Network wish Penny and her team all the best with their work going forward.