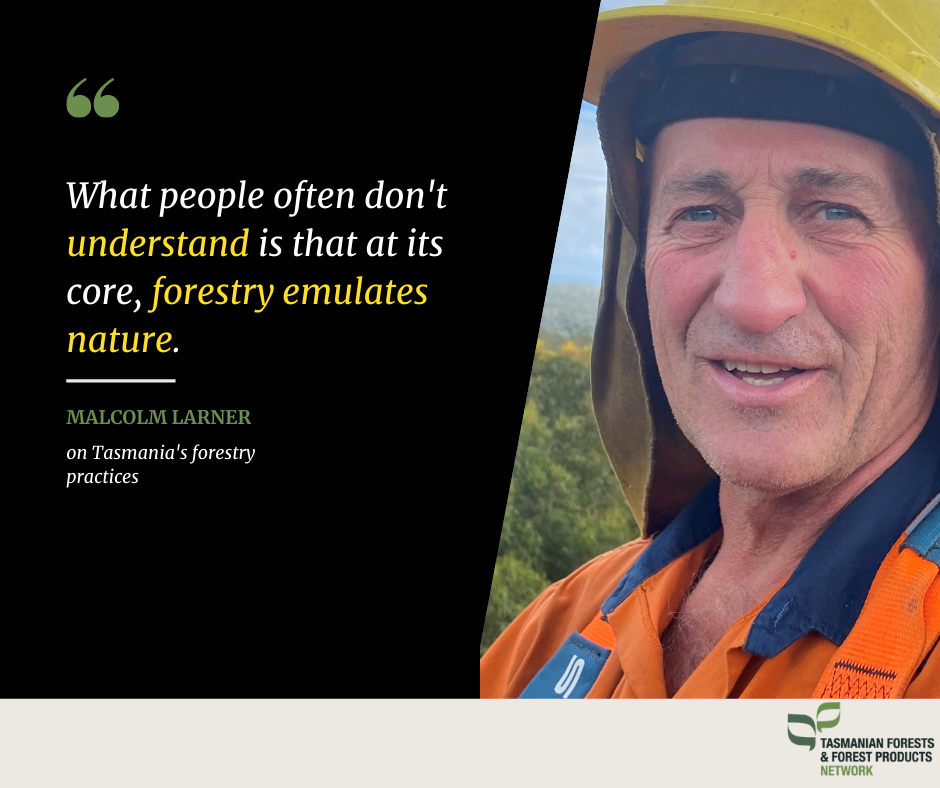 I first spotted Malcolm wielding long handled secateurs atop a cherry-picker, some 80-feet in the air, harvesting seed from the top of towering eucalypts near Cloudy Bay on Bruny Island.  Spying me from above, he lowered the carriage down and hollered, “You coming up?”

As we lurched forward and began our (somewhat terrifying) ascent above the treetops, Malcolm explained that the process of tree climbing to collect seed was an idea he flagged with Forestry Tasmania decades ago, as an economically and environmentally sustainable way of collecting capsules off trees in the state’s ‘locked up’ reserve areas. 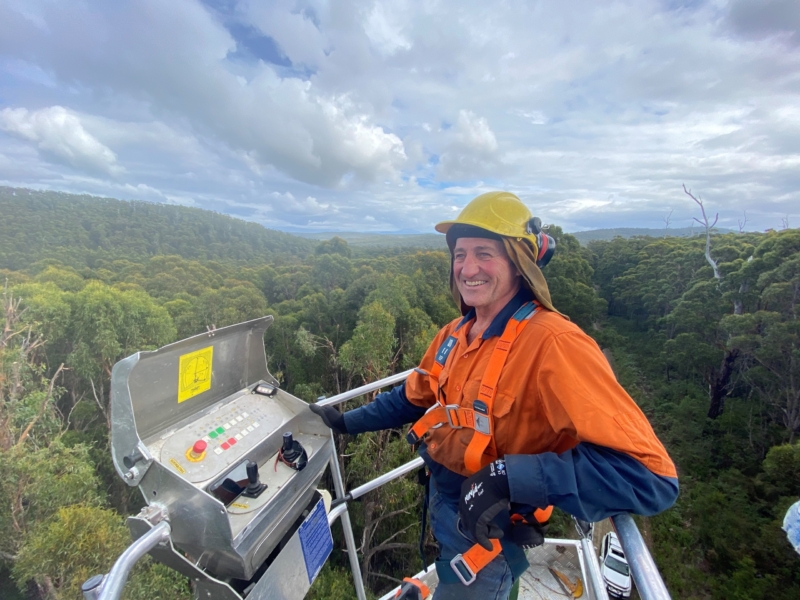 “When you fell a tree you lose about 50 per cent of the seed from impact, whereas collecting from climbing or from a cherry picker means we can be selective and cut the limbs out further from the trunk to make sure we don’t do damage to the tree.”

Managing Director, Tasmanian Eucalypt and Native Seeds (TENS), Malcolm Larner was born into the forestry industry and began collecting seed with his father as a young boy.

“Dad recruited me and a couple of my mates in grade five to help him collect seed in the Derwent Valley in the school holidays. It was hard work carrying heavy hessian sacks uphill for hours but I think I got paid about $56 for a few days’ work, which in those days was bloody good money for a kid,” he said.

“I’m pretty sure I managed to collect the most.”

Despite training in civil engineering and drafting—and a brief stint working in a mine in the country’s top end—Malcolm said his interest and passion for seeds was inherited.

“Dad had a forestry background, working with Forestry Tasmania and Forest Resources for years. When he retired in the late 1980s, he started working as a Forest Practices Officer but was still collecting seed at every opportunity. By this time, I was working at ANM (Australian Newsprint Mills) but collecting seeds most weekends. We started competing against each other collecting seed but we thought, ‘this is a bit stupid’ and instead decided to work together,” he said.

The pair established TENS and ran the business together for five years before Malcolm took over full ownership. The company continues to provide seed to Sustainable Timber Tasmania for reforestation.

Malcolm believes there are many misconceptions around forestry, which stems from a lack of understanding and a legacy of distrust of industry practices.

“I don’t think the broader community truly realise what we do and why we do it and what people often don’t understand is that at its core, forestry emulates nature.”

Traditionally, seed is collected during the harvesting process off the coupes to resow the area and regenerate the forest. However, on occasion there is not enough seed to resow the area so instead seed is harvested from trees nearby within the same seed zone, which ensures the elevation, temperature, moisture and soil type is similar enough to give the tree the best chance to grow and thrive.

“Previously people used to collect from all over and try to sow it in other parts of the state that just weren’t suitable for that species. There’s been a lot of research done with STT working closely with UTAS to determine how the changes in climate over time affect these seed zones,” Malcolm said. 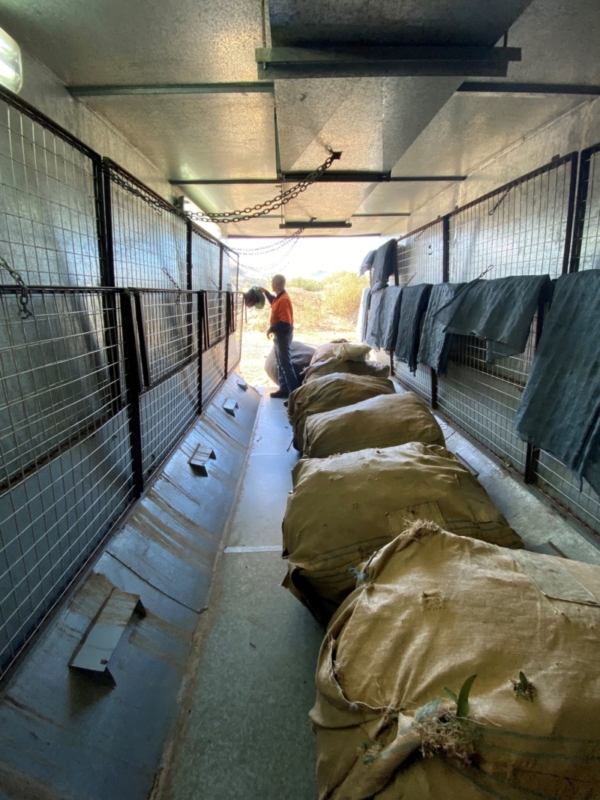 “The science, processes and planning involved in reforestation is really quite incredible.”

Malcolm said the seed he and his team are collecting that day on Bruny Island would be sown down the Huon Valley or around the Tasman Peninsular— areas which exhibit a similar microclimate to where the seed was harvested.

“When you cut down forest you need to replant it, so we aim to replant it with the best genetics and tree species from that area because you know that grows there—it’s been growing there for thousands of years.

“The most authentic way to emulate nature’s process is to collect seed off the coupe, harvest these trees, burn the area in a planned and controlled way at a very high heat and then sow new seeds onto the area’s fresh ash bed within 24-48 hours. When moisture is added to the seeds it creates the perfect environment for the seed to germinate, with its roots covered and protected by the ash.”

He explained that seeds often can’t thrive when they’re planted around leaf material, rocks and branches because the roots are exposed to the elements—in fact, very rarely will they survive.

Malcolm firmly believes regeneration burns play a critical role in the reforestation process but conceded this is often perceived to be a contentious and unattractive image for many outside the industry.

“To a lot of people’s eyes a log coupe is a bit ugly, but I’ve always looked at it through another lens. I look at a harvested coupe that’s been burned and I see beauty in what we’ve gained and what we’re growing back. It’s forever evolving. 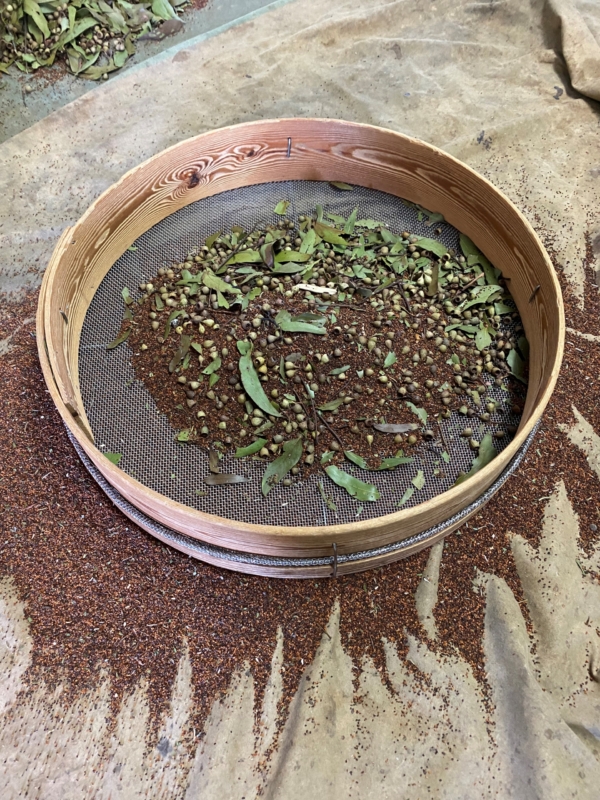 “I tell you what’s ugly to me— the forest after a raging bushfire— because I see it as a waste. We haven’t utilised anything, the resource is lost.”

The process of seed collection is one that Malcolm has refined over decades which involves drying capsules for 2-3 days in specially designed kilns at 40 degrees Celsius, sieving seed out of the capsules and blowing air through the raw seed to remove dust and light contaminants and storing it in cool, dry areas. In his experience, this produces exceptionally high-quality seed.

This is a sentiment shared by Sustainable Timber Tasmania Forest Officer, Rob Crellin.

“Malcolm is a passionate and skilled tree climber and has been providing seed to us for well over 20 years. He’s a wealth of knowledge,” Mr Crellin said.

He too said the image of a burned coupe is often misinterpreted and misunderstood.

“There is a certain beauty in a coupe if you’re prepared to look beyond what’s perceived to be ‘lost’. In fact, if you go back to that same area 12-18 months later, you’ll see new growth, a carpet of trees with shiny green leaves.

Though Malcolm Larner perceives there is still widespread misinformation in the community about the industry, he thinks the tides are turning.

“Even in the last three or four years, I’ve found people are more interested now in understanding forestry—how we do it, why we do it and what it means for our 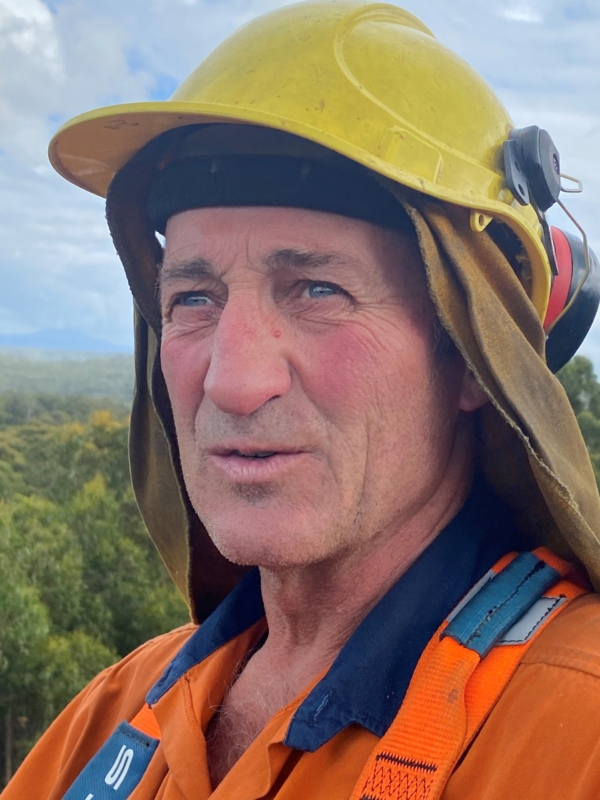 state. They are coming to recognise that the answers aren’t black and white and that we need to encourage the utilisation of the best natural renewable resource we’ve got,” he said.

“It’s really hard to change perceptions and all I can do is try to share my knowledge and my story and hope that people understand that I’m providing a perspective that reflects what I’ve seen and what I know from decades of working and living in and around our forests.”

Interested in learning more about seeds and reforestation? Visit the Seed Education Station at our TFFPN Agfest site (606) from 5-8 May in Quercus Park, Carrick.